Want to see an Elephant Painting???

and I mean as a verb, not a painting of an elephant! Well check this out and see which it is! 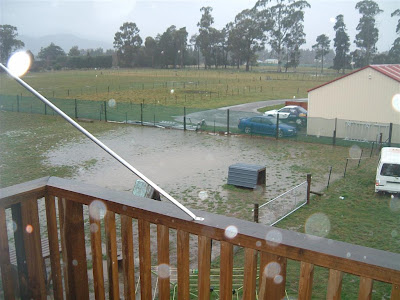 Well I've seen some pictures of some properties in Northland hit by the storm last week, which we in the South Island never got touched by... but this 2nd storm is collecting the entire country by the looks of it. We've had over 10 hrs of non stop rain so far and this is the most water I've seen lying around here in the 8 yrs I've lived in the Valley!
The goats are cut off from their kennels so they're tucked up in the implement shed with the horses! All are feeding their faces with hay :)
Thankfully we are super fast draining but of course that does rely on the rain stopping sometime! Looks like another rainy day tomorrow too. Poor little lambs and calves popping out in this weather, not only miserable for the animals but for the poor farmers too!
Just this second had the neighbours pull in to pick up their dog (we babysit her a couple of times a week for company for her) and the State Highway out to us is going to get blocked off any minute! State Highway 1 to Picton is already shut.... That's certainly a first since I've lived here, and the rain is supposed to continue all of tonight at this intensity too!!!
Must confess I do like floods and as you can see from the photo we're high enough to not have to worry about it hehehe.
So hope everyone is staying safe and warm if not dry, and for those of you on the other side of the world hope your Summer is being good to you!
Posted by KA at 4:11 PM No comments:

Had a GREAT outcome after a consult with a stressed cat (has been added, shortened as a testimonial on the website) who for 6 long months had been spraying, pacing and screaming inside. Mum and Dad had tried everything, pills and potions and nothing worked for more than a day or 2. The breeder had suggested it was possible he'd been raped by a tom (at her place) and in desperation I suppose, they emailed me.

Well I got a Tom involved but not in the way they thought, this wee boy knew there was a Tom cat hanging around the property and was ABSOLUTELY terrified of it. Terrified it was going to kill the chooks (his little clowns) terrified it'd hurt the other cats and the smaller dogs, he was so brave to mark inside because he was terrified that if the Tom knew he'd kill him too, soooooo brave to try to warn and protect his family in the only way he knew how...

Thankfully the family took enough on board to put a 'live trap' out to try to catch the tom. In the meantime only days before they received my email he'd been put on cats valium (stressed him out even more because he couldn't be alert to protect his family!) and his behaviour was as bad as it was prior to my talk and no Tom cat in sight! I can understand how you'd think that was a "waste of money" right?!

Mentally and physically exhausted his mum and dad made "the" decision for him, he was booked to go to the vet 10am the morning I got an email from dad..... Reading this email and getting to that point I was devestated!!! This sensitive brave soul had been put down, they hadn't "trusted" quite enough and they gave up!!!!!! The next line of the email started with a

It appears the afternoon before a little girl riding a bike came to the house asking if they had a grey fluffy cat because one had just been hit on the road.....

"I went for a walk and saw the mass of hair on the side of the road. Got closer-------------- IT WAS THE BLOODY TOM!!!! He was an ugly bastardKelly-Anne!!!! We'd set a 'live-trap' in the gorse on the perimeter of our paddock - adjacent to the main road. He'd been having a scoff cause his carcass had gorse flowers and thorns all over him. He was matted from head to tail. And reciting your email of Mikas description - "Rambo", I could definitely understand why ANY cat would be scared of him!

I'm not sure if I did the right thing but I placed the carcass outside the property where Mika might discover it (which he did as I looked on). I hope I didn't unleash a new 'can'. We refused to give him velium last night - rang the vet to cancel the appointment, and give our boy 'one more chance'. We weren't expecting him to be cured over night but we thought we'd see how he went.

Soooooo - that's the latest. It was almost 'lights out' for our little boy but it was amazing how circumstances crop up when you least expect them. Thanks Kelly-Anne for patiently reading through this email. I've told my family about you and they're just as amazed as we were. I'll let you getback to 'talking' to all the other Mikas.

Have a great day. Arohanui..."


ooooooh what a sigh of relief!!!! They'd believed me enough to put a trap out! The trap had caused the cat to get run over, and that wee angel on her bike brought the Tom to dad's attention.... if any of those things hadn't happened in the right order wee Mika wouldn't be with us still!

Rest in Peace Tom Cat, but I'm sure glad it was you rather than Mika... Mika is still improving, still a chatterbox but he's able to now release all that stress and get back to being himself again.

THANK YOU GUYS!!!!! Thank you for being open to trying me, thank you for taking just enough on board that it ultimately made a difference!

For everyone else PLEASE remember, they do NOT do this type of thing for nothing, they ARE trying to tell you something, no matter how small it is, it's important to them, the ones that delight in peeing etc inside are such a minority, it's either physical or emotional or BOTH! Mika was also found to have a urinary tract infection (no wonder with the stress he'd put on himself!) Maybe just sharing this story will give one person the patience to find the answer for their animal too, if it does that the old Tom cats life was not in vain...
Posted by KA at 2:44 PM No comments:

Listening for the sounds...

It was a beautiful t-shirt weather day yesterday so I got some work done and shot out for a ride. Just a cruisy one because after all the rain we've had thru last week it's as slippery as hell out there and can't affoard to chop up to much of their winter grass! So when it was all over 1/2 hour later and neither of us had broken a sweat I gave him the choice of grass or a feed (only time he gets a feed is after he's been ridden so he does quite like them! but on the other hand they're grazing thru some long grass at the moment that the frosts have hammered and altho the quantity is there the quality isn't, so he likes to scoff the short rich grass down where we mount up!)

So I say right Mac we've finished, grass or a feed? My logical brain gets directly involved and guesses "both" and I know that's me not him, but I wait for a word or an image from him and it doesn't come!

Now I know how I had to find Joe in the end and when I finally did, what I get from Joe is very much "word" orientated, and I know Mac and I are VERY intune with each other but I'm waiting for a nice clear answer from him.... and waiting..... and getting frustrated! And waiting some more..... !!!! What is going on? Why can't I hear my one true love?! So I vent at him and while I'm venting I realise that a very clear "knowledge" that the answer is "grass" is there too... no words, no images, but a knowledge that there really was no choice involved at all, it was simply grass and a sense of calmness with that knowledge. So I unclip his leadrope and tell him to scoff fast while I go and brush the mud off Roger so his cover can go back on...

He eats and sees me walking back towards him and starts eating at double speed (so funny to watch) so I tell him I'll grab some firewood first, load the wheelbarrow up and chuck that over the gate and head back to him, still eating furiously and watching me like a hawk. Anyone would think he's starving!

Anyway, the point of it is to show you how hard it can be at times to recognise things as "them" not us, and how we can look for the obvious and miss seeing (hearing) the subtle due to it.

Mac doesn't give me words, not like Joe (or some animals I talk with) he gives me feelings and subtle thoughts... often I only recognise "him" when I'm already answering him and then have to think "oh was that what he wanted?!"

At dressage for example, I always have a bag of Oddfellows (mints) in the truck for a reward for a good test and at our last outing his first test was a "good test" so we get back to the float and with no words, no thoughts, no images, I'm walking to the truck saying "yes, yes, I'll get them for you!" (in fact the bugger had me doing that about 6 times!) He is VERY subtle and I guess if I wasn't aware of the way animals can put ideas in our heads and we think they are our own, I would say he'd be the master manipulator! Do you know how many times I've had to FIGHT THE URGE to give them some hay in between their 2 fresh grass sessions if I go out to the paddock in the middle of the day... how guilty I feel when I fight the "urge".... he's a pro!!!!

But I forget how subtle they can be, particularly when they are "your" animal, and it would be easy to think I'm not communicating with him at all, until you start paying really close attention to what actually goes on in your head!
Posted by KA at 12:26 PM No comments: